The essence of democracy is to give a voice to everyone; importantly to ensure that the majority voice takes precedent over that of the minority.

Ghana may soon go to the polls to elect a President and members for its Legislature and as a democratic state, the majority will determine who takes the highest office and those who make it to parliament.

That’s all that is needed; majority…

And Ghana is not a case in isolation, since this is a core democratic principle, it resonates with every democratic state.

But don’t you find it problematic, somewhat unfair to the good of society that someone like Bukom Banku carries the same vote as Dr. Paa Kwesi Nduom on a perfect democratic spectrum—-and a bunch of people like Banku can literally over-rule the choice of highly informed, educated and experienced people like Dr. Nduom on matters that the former probably has no idea about?

Of course that’s the sacrifice we have to make to stay within the framework of democracy: give equal strength to ignorance and be compelled to say, a vote cast under the shadow of ignorance, inducement or any sort of tendencies of unfair play is equally as important and valid as that carefully realised after proper examination and scrutiny of the issues at stake.

We cannot change the governing principles of democracy and the only reassuring prospect is that, we can do our best to evaluate the game play by ensuring the players have a fair idea of the matters on which they would be required to decide.

This doesn’t seem very probable on a continent where people are so much interested in instant gratification and would therefore take a bag of cement or two tubers of yam—-and proceed to vote for the provider of these items, ignoring any other elements of the political discourse.

I have seen President Mahama touring Ghana and speaking well of his achievements—unveiling finished projects, cleverly timed such that these new beautiful edifices are ready just a few months to when Ghanaians have to make a decision on who they want to rule them for the next 4 years.

If Ghanaians, perhaps even if the majority has proved that they are capable of reasonably evaluating the economic and political climate and then make a decision as to who is worthy of their votes, democracy would serve a greater good—-but over the years, we’ve come to painfully acknowledge, that the Ghanaian majority, mostly built on the back of tribalism, unfettered party loyalty, bribery and hogwash propaganda do not care about the greater good. They do not even know of it, let alone care for it.

Britain is almost in a political and economic chaos, because of the absurdity of majority rule—-today, Brexit has a majority support and mandate but practically and sensibly, there’s no good case for it.

The backbone of democracy from its classical era to today has always been a majority rule—even if its a tyranny of the majority.

There’s no consensus on a new emerging conception though it seeks to correct the inherent absurdity of majority rule, that sometimes democracy shouldn’t be garnished with majority decision.

READ ALSO:  Campaign Started In Britain To Stop Donald Trump From Travelling To The Uk For Violating Hate Speech Laws

I wholly agree with Harvard Professor-Kenneth Rogof when he recently wrote:

The idea that somehow any decision reached anytime by majority rule is necessarily “democratic” is a perversion of the term. Modern democracies have evolved systems of checks and balances to protect the interests of minorities and to avoid making uninformed decisions with catastrophic consequences.

The greater and more lasting the decision, the higher the hurdles.

In countries like Ghana where a large percentage of the population is to an extent intellectually feeble, risible political dishonesty succeeds in shaping the journey of the majority and ultimately this majority determines who and what for all.

There are complex issues based on which Ghanaians have to vote to choose who is the right leader for them—-the issues are so complex that trusting them in the hands of a populace whose decision-making prowess faintly take into consideration critical thinking makes it seem we are about to undemocratically elect leaders, because the majority will do so based on derisory grounds.

Democracy remains the best option among the many but it certainly works better under a particular unique climate, arguably, when those exercising majority rule are well equipped to appreciate it.

Until we are able to cultivate a majority of critical thinkers in Ghana, our democracy would continue to be envied in abstract but it wouldn’t make any substantive impact on the lives of Ghanaians, because it surely is not for the greater good.

Ghana to me is undemocratically practising majority rule—-the cause of our many problems. 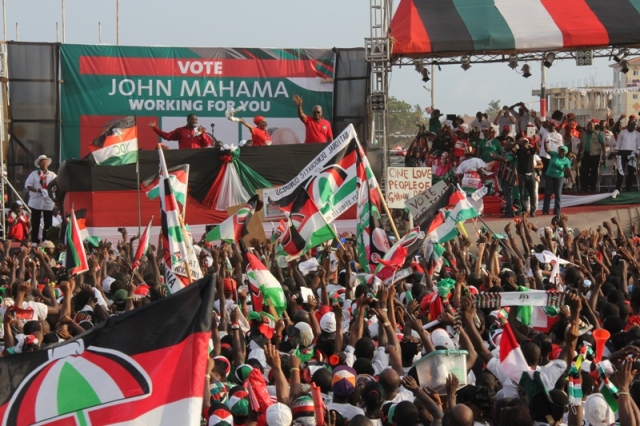